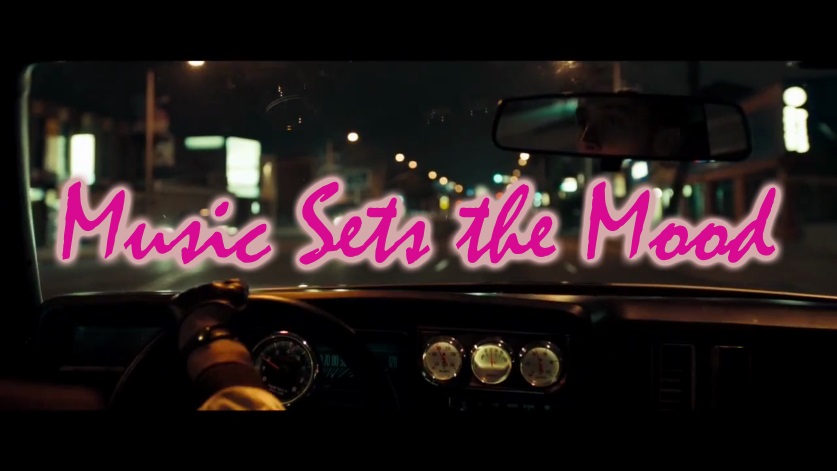 Music in a scene can do a lot of different things. It can simply be a musical translation of the action, it can be a background tone, it can be conspicuous in its absence, etc. But no matter how well or how poorly it’s done or what it’s trying to do, it affects how you feel while watching the scene. Let’s play around a little bit with the movie Drive (because I am currently editing it, I just did a short edit of it and most importantly I have it ripped on my hard drive) and see what we can do with two scenes.

We’ll begin with an early scene, when the Driver first meets Irene. In the theatrical film, there is no music. This does a good job of letting the audience really feel the Driver’s silences the way Irene does. It also lets us really zone in on the visuals, which get very interesting when they leave the elevator. That makes it easier to appreciate the beauty of the framing of the doors. We’re not going to improve that, but we can mess with it and see how the feel is impacted. Here’s the original scene:

Now at this point, the audience has no idea what kind of film we’re in for yet. Unless you saw the trailer and thought you were in for a Fast and Furious action-packed adventure, in which case you were about to embark on two hours of disappointment. Our takeaway from that scene is that the Driver is not a very social creature, Irene is curious about this guy and that Nicolas Winding Refn knows how to frame a shot.

We could add some music from Nip/Tuck and have the dissonant chord change when they exit the elevator:

Now the scene feels very melancholic. It establishes early on that their relationship is destined to be a sad one, and the shift when they exit the elevator suggests that it’s only going to go downhill from there. This might make us root for them but ultimately we would be expecting something to go wrong.

This might give the impression that Gosling is an evil dude and that there are supernatural elements at play, for some weird reason. The tone is now one of ominous foreboding and we might expect to see some ghosts/demons/witches etc somewhere along the way.

Or perhaps the film is going to be more of a thriller, and so we might use Cliff Martinez‘s slick and propulsive score from Contagion over it:

Now the scene feels as if this meeting somehow sets the pieces of the conflict in motion. The propulsive music cues the audience that things are going to be moving fast and that this meeting is setting it off. So buckle up and get ready for all that car action!

Another option is that perhaps things aren’t going to be so bad for these kids after all. Here’s the scene with the Smith version of ‘Baby It’s You’:

Perhaps this is the first meeting of what will become a special relationship (that’s kinda true!). But now the Driver feels cooler with the looser song playing, and their meeting comes across much more as a meet cute than him being aloof as hell. Now his half smile takes on a whole new meaning and ties in with the lyrics quite nicely to give the impression that we are going to see a sweet relationship blossom.

Now let’s move on to the bit we all saw in the trailer a lot: the car chase. Here’s the original with no score:

Very nice sound design and the lack of music lets the screeches be the aural landscape for the chase. I love that, but let’s pretend for the sake of this article that I did not. What else can we do with it?

For starters we could play it more stylized, make it feel like what we’re seeing is more of a cool movie. Pretty much anything from Tarantino would suffice, I think. Here’s the scene with Shivaree‘s ‘Goodnight Moon’:

Now it’s got a bit of that cinematic quality, like when we watch Pulp Fiction we don’t feel like Jules and Vincent are realistic but they are cool as hell. In the theatrical cut Drive strides for realism but I think this track gives it a touch of that ‘we’re watching a movie not a documentary and the movie is freaking cool’ vibe.

The stylized version is cool but it’s not THAT different. What if we wanted to try to completely change the feel of it? Insert a little heroic music, drop out the raw sounds, and see what happens. Here’s the scene with a touch of Harry Potter added to it (it’s rough but kinda synced up with the action):

This obviously wouldn’t fit the rest of the movie but that’s not the point of this article! That could belong in a totally different movie, though you would probably say it was laying on the score a bit thick. It’s certainly different.

Now that gives me an idea since we’re talking strings and orchestration. Check the scene out with some great, driving Game of Thrones music. Obviously, it doesn’t fit the rest of the movie at all and the piece reminds the viewer too distinctly of Game of Thrones, but if it didn’t this could work. At least it’s interesting to hear:

This gives the scene a more epic feel in my opinion, like it would be at home in a modern blockbuster. Every car move feels more sweeping, and if the film were made this way we’d expect the chase to last longer. Also it would have cost a hundred times more.

Or we could put a supernatural spin on it if that made-up version of Drive I mentioned earlier were real. We could use Goblin again to tie it together. Watch how it gives an otherworldly feel to the people in the other car:

This changes the feel quite a bit for me. It gives the other car a more otherworldly feel, and the fact that we don’t see the other driver reinforces it more. This would feel right at home with the earlier ‘supernatural version,’ but only if we saw some ghastly stuff in between the two!

Whether manipulative or not, all music does SOMETHING to a scene. It might be good, it might be terrible, it might be intentional, it might not. But taking these two scenes and not touching the video (I know, I chopped some off at the beginning of the Harry Potter one) really shows how much the music contributes to what we’re feeling about a scene. And what we feel about a scene informs our interpretation of their actions since so much of a visual medium is unspoken. A look can be coy, attracted, psychotic, creepy etc depending on how we’re feeling going in and during a scene. Hopefully we have given a sample of how faneditors play with that feeling.

And lastly, here’s a fun take for the Star Wars fans out there:

Join the discussion in the forum